After five years as Chief of Police I returned to the farm expecting to remain there the rest of my life, but fate had not so decreed. A call came almost immediately to serve as superintendent of the Kansas State Temperance Union. I could not refuse, although it meant a full schedule of lecturing, educating, distributing literature, editing a monthly paper, analyzing suspicious beverages for city and county officials, and running a detective bureau and law enforcement department.

At conventions, Chautauquas, and street fairs I made vigorous appeals for prohibition and had five speakers in various parts of the state nearly every Sunday. We answered questions and refuted arguments, the most common being, "You can't take away my personal liberty."

I pointed out that there is "no such animal" as personal liberty. The Ten Commandments, written on tablets of stone, contain eight "Thou shalt nots" direct and two others by implication. We are also hedged in by man-made laws from every quarter. The law tries to make a good citizen of you by taking away your personal liberty. To those who insisted that "we need the revenue," I replied, "The saloon on the corner pays into the city treasury $1,000 each year for what? The privilege of catching everyone it can and turning men into drunkards, vagabonds, and jailbirds."

A marked change in public sentiment gradually became evident, and enforcement machinery grew stronger and more efficient. Numerous amendments by the Kansas legislators tightened the clamp upon offenders until our state had the most stringent anti-liquor laws in the country and was considered the standard-bearer of the prohibition cause.

The victory in Kansas was far-reaching, serving as a mighty lever in Eastern campaigns. I was asked to help in whirlwind crusades throughout Nebraska, Oklahoma, and Ohio. Our meetings were usually in the open; the speaker's stand was a wagon alongside a saloon. A driver, two speakers, and a bugler made up the group. One or two lusty blasts from the horn gave us a start by attracting passers-by, and soon we would have a crowd. Hostile gangs, egged on by saloon-keepers, often tried to break up the meetings without success.

Our Ohio campaign lasted a month, giving me an opportunity to revisit New Harrison, the place of my birth. I had never returned since that day, more than half a century before, when I bade my comrades goodbye, expecting to be back in two years, provided the "border ruffians" were driven out of Kansas by that time. There was little chance, I knew, of seeing a familiar face. Boyhood friends had either gone off to war or moved to larger cities.

There were many changes. Swamps once impassable for man or beast had become tillable land, and most of the timber was gone. Greenville Creek seemed much smaller, Macadamized highways, railroads, and electric interurban cars had revolutionized transportation.

Our farm seemed shrunken in size, with a railroad cutting diagonally across the fields. The little house showed signs of age; but attachment to one's birthplace, no matter if it is time-worn and weather-beaten, cannot be shaken off. Conjured up from the past were all the early associations, as well as my own budding hopes and ambitions.

As I wandered about the countryside incidents long forgotten flashed across my memory. I thought of the otter slides, the bee trees, and the holes of coons high up in leafy branches. Barns, as of old, were considerably larger and more substantial than the houses. On farms the hand rake had been replaced by the sulky rake, the old chaff-piler by the threshing machine, and the one-horse shovel plow by the two-horse cultivator and double-row weeder. I learned that whisky at sheep shearings and in the harvest field was a thing of the past.

When I crossed the common at Greenville I recalled the drunken riot there and my father's admonition. Did my long, persistent fight against the liquor traffic stem from that day of violence?

A few years ago my oldest son remarked, "Pa, if you had never left the farm to work for prohibition, you'd be $100,000 better off than you are today." He was probably right; yet I have no regrets. At a critical time in our state's history I was given an opportunity that comes to few men to inaugurate a new deal.

Now, as I approach my ninety-fifth year2, I live all alone, spending the winters in Burlingame and summers in a little cottage near the farmhouse where my brave sweet Jennie and I started housekeeping. My thoughts go back continually to those happy days with her and with our eight children, who are scattered far and wide, having homes of their own and little ones growing up. There is no cause to complain. It is the way of life.

At the dedication of a boulder on the Simerwell burial site across Six Mile Creek, I was glad to pay tribute to the kind old missionary, whose homestead is now owned by his grandson, John Carter, a former county superintendent of Shawnee County.

Other Auburn boys have won distinction. There was William Quayle, who attended my Sunday School class at the age of thirteen. One stormy night he walked to a Methodist revival meeting at Prairie Center about two miles away. When someone inquired the following day how many converts there were, the reply was, "Only one—a little red-headed boy."

That one, Will Quayle, took his conversion seriously, becoming an illustrious bishop of the Methodist Church. At the age of thirty he was made president of Baker University, from which he had graduated only five years before. He later presented to the university his famous collection of Bibles, one of the finest in the nation. During his busy career he also found time to write many books.

Lewis Lindsay Dyche was but a few weeks old when his parents came to Auburn in a covered wagon. He spent his boyhood exploring the woods and fields of this region, and was twelve years old before he learned to read and write. His father used to say, "I don't know what I'm going to do with Lew. He is smart, but all he wants to do is hunt, fish, and gather insects, bugs, and butterflies." As Professor of Zoology at the University of Kansas, he established a remarkable collection of mammals, now displayed in a museum appropriately named for him. His numerous scientific expeditions took him from South America to the Arctic region.

On my tramps around Burlingame—I walk as much as a man of fifty—I pass the home of a Mr. Twitchell, whose son originated Coca Cola. On Buttermilk Lane lived a Civil War veteran, John J. Flinn, who heard Lincoln deliver his Gettysburg address. He hired a Connecticut Yankee to build his house, paying him $1.75 a day, but always subtracted a few cents for the time he spent lighting his pipe.

Something in the atmosphere of this locality seems conducive to longevity. Jesse Yeager, who lives a mile west of Auburn, has passed the century mark. Sam Moran, another early settler, had the reputation of being the oldest white man born in Kansas. I myself am the last living officer of the Eighteenth Kansas Cavalry Regiment, which played a part in protecting the lives and property of early settlers from the terrors of Indian raids. We veterans agreed a good many years ago to meet annually to talk over old times as long as two of our numbers remained. There is a feeling of camaraderie among those who have stood together in peril and have drunk from the same canteen.

For all of its trials and conflict, life has brought a good measure of contentment and peace. On warm sunny days I sit out under the lilacs and chat with neighbors and friends who stop to admire my zinnias, gladioli, and dahlias. As I prune my grapevines or work among the fruit trees in the orchard, I look across rich harvest fields stretching far into the distance. Kansas is by no means a "Great American Desert."

In a nearby pasture, where the hard sod has not been touched by the plow, one may still trace deep ruts cut by covered wagons and lumbering Concord coaches. The old Santa Fe Trail traversed the entire length of Burlingame from east to west, and it was here that the overland stage changed horses. I have seen four horses led out with twitches, each horse held by one man while another hitched them to the stage. When everything was set and the driver seated with lines in his hands, the twitches were removed, allowing the horses to dash off at full speed across the plains.

Past events are as clear and vivid in my memory as when they were happening. These recollections sometimes have a way of spinning themselves into verse. So let me end my story with a rhyme which, for want of a better name, I'll call

In the long time ago, when the country was young,
Before her glories and praises were sung,

The roads we traveled were over trails
That had been blazed through hills and vales.

The trek was on; ‘twas Westward Ho!
And bye and bye to Ohio.

Then on, still on, by slow advances,
Until they came to a place called Kansas.

Their maps, tradition, and papers said
The land beyond that line was dead,

That still beyond was a desert great
That never could be made a state.

But there was a tale by campfires told,
That still beyond was a land of gold.

Adventurous men, for the sake of gain,
Started to cross that trekless plain.

The motor power was the oxen way,
And they trudged along from day to day….

While grass was green the road was live
And busy as bees in the Kansas hive.

When the grass was dead that once was green,
Not a wagon on all the road was seen.

The men were scattered everywhere;
Some went here and some went there.

Some built a cabin beside a rill,
Some dug a hole in the side of a hill,

Some built a ‘dobe of grass and clay,
Called it home, and a place to stay.

Then the laws of God and man were obeyed;
Women came, and the men they stayed.

Wonder of wonders, seeds planted grew
And the few became a mighty crew.

The land that was once a barren plain
Became a sea of golden grain,

And the place we called the desert great
Became a great and wonderful state.

Then things changed in many ways,
Since the time of the oxen was fifty days.

The stagecoach came with an all-night drive
And the fifty days were reduced to five.

Then the train came along with a wheeze and a choo,
And the five days were reduced to two.

Then the telephone came, and the train wasn't in it;
The time was reduced to less than a minute.

Then the radio came, and it took a part,
And now we're there before we start.

Take the past and present for a text;
Can we but wonder what comes next? 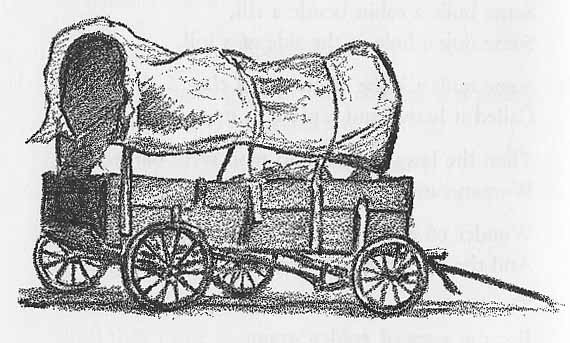