The habits of most of our wild animals were familiar to me. Deer were common; also porcupines, and small furred animals, such as the black and grey fox, raccoon, opossum, mink, muskrat, and groundhog. I have counted as many as one hundred squirrels at a time running along a rail fence at the side of our wheat field next to the woods. They were fond of beech and hickory nuts and would follow us, scolding and chattering, when we had nutting parties. (We always gathered six or eight bushels of hickory nuts and a bushel or two of hazelnuts to eat during the winter.) The squirrel's curiosity is often his undoing, in case a hunter is around. Then he cautiously shows his head around the trunk of a tree or over a fork. Generally he sees or hears you before you see him.

There were many wild turkeys and ducks in season, and the drumming pheasant could be heard, but not often seen. It was shy and quick on the wing. Flocks of wild pigeons, now extinct, had a regular roosting place to which they would fly in the evening. Each flock must have been half a mile long and equally wide.

Somehow I could never tell the track of a coon from that of a groundhog until I trailed it home. The groundhog had two entrances to its burrow with a pile of dirt in the front. Underneath there were yards of tunnels with a nest of soft grasses. The coon, of course, never went into the ground, and was a night prowler, seldom showing himself during the day. As a rule he started out on his nocturnal expeditions early in the evening, leaving his home in some large tree.

One night two other boys and I set out after coons, taking a large white bulldog and my dog, Carlo, who was a brindle with just enough hound in him to follow a scent keenly. He was a banner coon dog and the fastest trailer in our parts. The pair followed the lane a short quarter of a mile. Before reaching the woods, however, they came back, and try as we would, we couldn't send them out again. It was clear that they were frightened, with ears up and tails down.

As we neared the high rail fence separating our field from the woods, we stopped short. Standing on his hind feet with his head over the fence was a panther.

"Let's light the lantern," I whispered.

We were carrying a perforated tin cylinder, some six inches in diameter, that served as a lantern. With the tallow candle in the center giving a faint glimmer of light, we retreated at a fast walk, the dogs staying very close. When we reached the barnyard, a hundred yards from the house, we broke into a dead run. I stumbled over a stump, but was soon on my feet again. Three breathless boys and two panting dogs burst into the kitchen, grateful for their narrow escape.

A few weeks later the panther gave me another scare. This time I was alone fishing, a good quarter of a mile from home. The back water from the dam was on our farm. It was warm, cloudy, and dark, an ideal night for catfish. Fish were biting and I had a nice string. Just across from where I sat a large tree had fallen and lay partly in the water. All at once a dreadful scream rent the air—a sound that once heard will never be forgotten. I have heard it since many times in Colorado, where these catlike animals are known as mountain lions.

If ever a boy's hair stood on end, mine did that night. I got home all right, but without my nice string of fish. I had no further dealings with the panther. Its lair was believed to be in an old windbreak several miles away.

Our Methodist preacher had a passion for hunting and I often went with him. I would sit patiently through the midweek prayer-meeting until the last hymn was sung. As soon as the congregation left, he picked up his gun and I whistled for Carlo. Then off we went to the woods, seldom returning empty-handed.

Late in the fall hunting matches were common, with thirty or more men choosing sides. The wager was a supper to be paid for by the losing party. It was a feather in your cap to be a good marksman. The men sometimes amused themselves at public sales by shooting at a target placed against a tree. Since all bullets were molded, the lead was an important item, and the winning marksman had the privilege of taking it from the bark where it was embedded.

There was one delicate feat that only a very few could perform. From a distance of twenty or twenty-five yards, an attempt was made to snuff a lighted candle without touching the taper itself with the bullet. The best time for such a contest was a still dark night when no breeze was stirring, and the favorite spot was under the bridge spanning the Greenville Creek.

This stream provided plenty of sport for the fisherman. Our best fish was a rock bass—a flat, light-colored wide mouthed scale fish, weighing from three to five pounds. The yellow perch was another good biter, as were the white perch, sunfish, catfish, silversides, and chubs. The common large-mouthed bullheads were caught at night or when the water was riled and muddy.
The pike was in a class by itself, preferring still water. As a rule it lay motionless near the surface, seldom more than four inches below. Its movement was a glide of lightening-like swiftness, rather than a swim. There were three ways to catch it—by shooting, snaring, and hooking; and it made choice eating.

Every three or four miles along the creek there was a dam with a mill for grinding grain and sawing lumber. Above the back water of these dams other temporary dams were made of rock or slats in the springtime, forming an open place about four feet in width. Here, where the water ran swiftest, we would set a funnel net with the mouth downstream, in the hope of catching the fish headed toward the shallow upstream water to spawn. If a fish once got into the net, there was no way of escape. I have taken as much as one hundred pounds of fish out of the net in a morning. They were mostly suckers that cannot be caught with hook and line. The bass is a good jumper and seldom gets into the net. If a muskrat entangles himself in its meshes, he cuts his way out and the fish play "Follow the leader."

The large bodies of still water behind the dams made excellent skating rinks in winter. I was the proud owner of the finest skates in the village, a gift from Father. They were steel-guttered with turned-up runners topped by brass acorns. I flew over the ice, cutting figure eights and letters, but I could never whirl when going full speed nor skate backwards like the older boys.
Sometimes we chose sides for shinny matches, the goals being sixty or eighty rods apart. The two captains skated to the center to start the game. Players on each side had sticks with crooks on the end. The ball was tossed into the air.

If one of the captains struck the ball as it fell, it was "high buck," and the ball was in play. If he missed, "low doe" got the ice lick. Then twenty or more skaters rushed for the ball, sometimes bunching and falling, but seldom getting hurt. It was an exciting sport and put a glow into our cheeks. 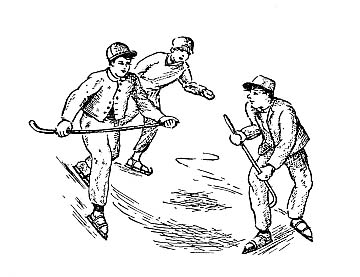