I - Seven Times One Are Seven

The little log cabin where I first saw the light of day on May 23, 1841, stood at the edge of some woods in western Ohio. It was one of many rude dwellings that made up the town of New Harrison in Darke County. A small section had been cleared of walnut, oak, hackberry, beech, ash, and hickory trees to make room for the pioneer settlement, but cultivated fields were still thickly dotted with stumps.

In addition to farming sixty acres of land, my father, Michael Stahl, ran a cooper shop and made shoes. Into his eight children, of whom I was the oldest, he tried to instill something of his own courage, industry, and independence. A couplet which he often quoted ran something like this:

"The work of the world is done by few;
God grant that a part be done by you."

His father, a native of Germany, bequeathed to his descendants the solid surname meaning "steel," as well as the firmness and strength of character the name signifies.

My mother was a staunch helpmate. Born of Scotch and Irish parents, she had spent her early girlhood among the Pennsylvania Dutch, and spoke German as well as English. Although not a "professing Christian" in those days, as my father was, she was in perfect agreement with his views on morals and proper conduct. Both were honored and respected in their community. When the Women's Crusade came our way in the early fifties, Mother became an ardent member of their Praying Band, and could always be counted upon to fight for the right.

On the other side of the pike road that bisected our town was Abe Miller's blacksmith shop, where rough farming implements were made. Abe could do anything from sharpening plow points to replacing metal tires on wagon wheels. As I watched him place a thick iron rod in the fire and hammer it into a horseshoe, later tacking it on the horse's hoof, I made up my mind that I, too, would be a blacksmith.

Unless, perhaps a soldier's life was preferable! We had June training days when the men gathered one hundred strong and drilled for hours. They made a dazzling picture parading in their smart uniforms fastened with shiny brass buttons, and arrayed in hats adorned with tall white plumes. Could anything be finer than to flaunt such a plume?

My first real accomplishment was "rattling the bones." I was able at the age of seven to twirl and click two polished calf ribs between my fingers in quite a professional manner. Our hotel keeper encouraged fiddlers from far and near to use his wide paved sidewalk for evening concerts, and I often sat and rattled the bones in time to the music.

It was during our war with Mexico over the Texas occupation that recruiting officers marched up the pike into New Harrison to the tune of fife and drums. The stirring music set my blood a-tingling, and I pranced along beside the soldiers, clicking the bones. When the men stopped to rest, one of them clapped me on the shoulder, saying, "You're quite an expert with those bones, Sonny. Let's see what you can do with the snare drum."

I beat out such a vigorous rat-a-tat-tat that the officers all shouted, "Bravo!" and insisted I must go along to war with them.

"You are much too little to carry a gun," one soldier explained with a wink at the others, "but if you beat time with the drum, it will help the rest of us fight that much better."

Excitement was in the air. Some of the men from our town were signing up, among them my uncle. I tugged eagerly at his sleeve and finally attracted his attention.

He was busy with his own affairs, but I heard him reply, "That's fine."

Quick as a flash I ran back to the house to tell my parents, but before I reached the corner of our yard, the sound of fife and drums again filled my ears. Turning, I saw the men starting off in the other direction. Were they marching away, leaving me behind? On they went without so much as a backward glance at the would-be drummer boy standing abjectly in the middle of the road. As the music faded in the distance, I drowned my disappointment in a flood of tears.

From father's cobbler shop came the steady tap, tap, tap of the hammer. I was sure of finding comfort there. Father was busy at his bench, but he put down his tools and listened attentively as I poured out my tale of woe.

"In order to be a good soldier," he said, "you must learn to do many things besides beating a drum. Perhaps this is a good time to start."

He took the old Blue-backed Speller from a shelf and propped it up on his workbench where I could see the words as he pronounced them. That was the beginning of daily lessons punctuated by the rhythmic strokes of the cobbler's hammer. Reading was comparatively easy for me, and before long I could repeat without prompting all the rules of Kirkham's Grammar. When some of Dickens' stories appeared as serials in Horace Greeley's New York Tribune and the Columbian of Cincinnati, I could hardly wait for each new chapter to appear. Arithmetic, with its multiplication tables and decimal points, was more of a challenge, but I gradually mastered it.

Father was a good scholar for his times—far above the average. He lined off the hymns in church and even taught singing school. The song-books were wide, allowing several to look on together. Each note of the scale had a different shape or shading from any of the others. "Buckwheat notes," we called them.

During the three winter months of each year I attended a subscription school. There were two of these—one a mile east and the other a mile west of our house. Each was built of logs and warmed by a large wood-burning stove near the center. A long board served as a desk for the writing classes, and seats consisted of crude slabs from the sawmill set onto wooden legs. They had no backs.

Most of the pupils took noonday lunches in baskets or pails. A large woods sow had the habit of slipping into the east school, which stood at the edge of heavy timber. Grabbing the handle of a basket in her jaws, she would dash through the open door with her stolen meal.

After one of these raids, an older boy suggested a means of trapping the thief. He tied a long heavy cord to the door, and we took turns watching and waiting outside during recess or before school took up in the morning.

At last the sow put in her appearance. The teacher had not yet arrived and we children were all out on the grounds when she ran into the building. Someone pulled the string; the heavy door swung on its wooden hinges and closed with a bang. The sow was ours!

Three of us climbed in through the windows onto the writing desk, out of reach of our indignant captive. She was a raw-boned creature, six feet long and three feet high, and weighed at least four hundred pounds. She ran round and round, overturning benches, scattering books, spilling ink, and breaking slates.

"Keep her going!" shouted the big boys outside. "Don't let her bite you!"

Just then the teacher appeared and opened the door. The frightened sow tore past him and headed straight for the woods. She forgot in her haste to pick up a basket, nor did she ever return for another. 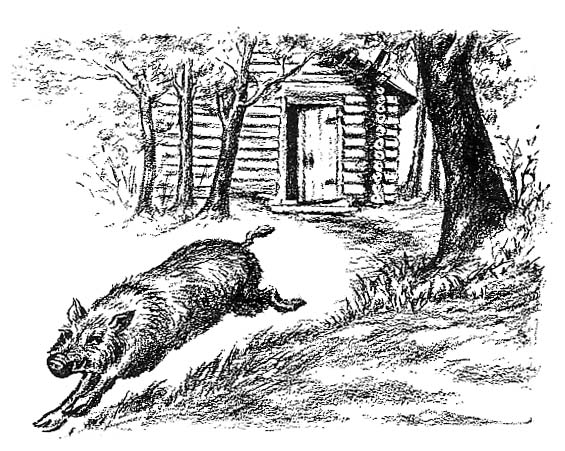